I've been using Ardour with my Echo Audiofire 12 on Elementary OS. I've noticed that the latency seems to 'drift' by about 10 ms and then snap back every 10 minutes or so. I decided to get a bit more analytical and compare the behavior to an RME HDSPe AIO sound card and a Behringer Xenyx UB1202 USB mixer. The results are below.

The Setup
All tests are run at 44.1kHz and 512 samples with 2 periods per sample. The charts below show the hardware latency, which is the total roundtrip latency minus the expected buffer latency (3 x 512/44.1 milliseconds).

This is a recording of the click track in ardour which I then re-recorded multiple times on new tracks (each time recording only the original one again). You can see the behaviour of the drift-and-snap-back here in an informal way. The top track is the original, the ones below are re-recordings of it. I zoomed in to show a single click from the track: 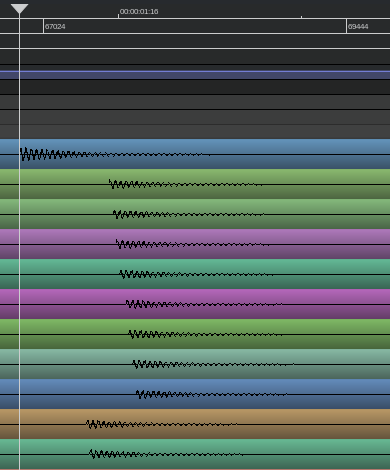 I ran jack_delay on the interface for more than an hour, and recorded the measurements. I visualized them in this chart. You can clearly see the latency increasing and snapping back each time:

Zooming in a bit, we can see the step-wise increases in latency:

Displayed as a number of samples, the jumps are pretty constant at 8 samples each jump:

Comparisons to other sound cards on the same computer

Compared to the RME sound card, which is completely solid (this was for about 30 minutes):

And the Behringer USB mixer, pretty solid too (notice the sub-millisecond differences in the scale on the left):

Wondering what could be the problem, I ran jack_delay again and looked at the QJackCtl message log. Every time the "snap back" occurs, there is an XRun at exactly that moment.

I can think of the following theory of what might be going on:


Is there anything I can do to sync the clock properly, if this is the problem?

Does anyone have experience with correct clock syncing over Firewire from the host computer? Perhaps any other theories as to why this drift-to-Xrun might occur?
Last edited by finetuned on Sat May 18, 2019 6:19 pm, edited 1 time in total.
Top

I think you're right about this being caused by the soundcard using its internal clock.

You haven't said anything about your JACK setup.

I don't know much about firewire, but the key would seem to be getting the card to use the computer's clock, which may be a setting in JACK.
Top

(Moderators: I realize that this thread might be better suited to the "Computer Related Hardware" subforum. Feel free to move it there)

I've been looking through the Jack settings (at least those exposed by QJackCtl) but could not find anything related to the clock source in there: 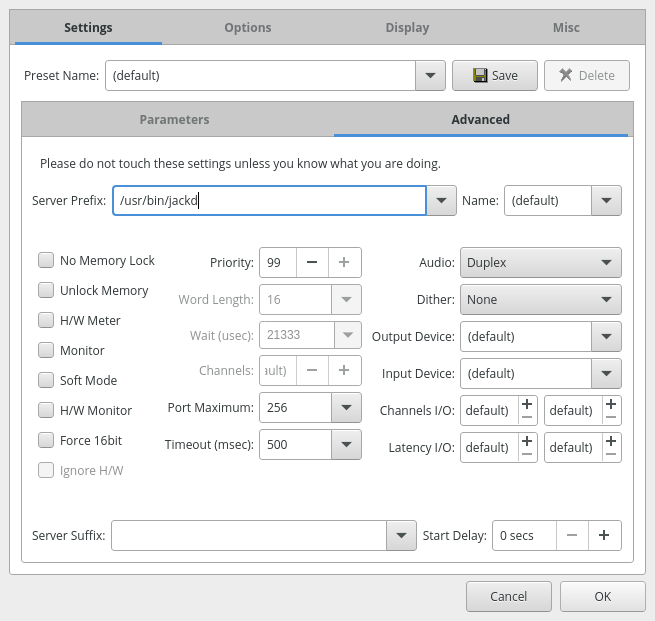 I see that there is a --clocksource attribute to the Jack startup parameters, but I'm not sure how to use it correctly. Does anyone know?
Top

Is there a control in

alsamixer
to switch the card so the 1394 light comes on?
Top

Sadly, alsamixer only shows "This sound device does not have any controls". I can control the RME sound card just fine with it, just not the Audiofire.

Update: I made some progress. When I launch ffado-dbus-server, the "1394" light comes on. However, the output from that command shows errors related to the clock source:

Another update. I compiled and installed the latest ffado version (2.4.1) from source and managed to get it to run with Jack and the jack_delay tools. I also reverted the firmware version of the Audiofire back to 4.8, which seems to be the version that the FFADO drivers were developed against originally.

The ffado-dbus-server now shows no errors pertaining to the Clock of the unit (good), and shows:

I now have the "Internal" and "1394" leds lit, and I can use the "firewire" driver in Jack. However, the drift problem has not been solved; the behavior is mostly the same as with the Alsa driver.

I think I have to learn more about how clocking is communicated between the audio device and the computer; I'm still not certain about how that works and if that is indeed a factor here.
Top

It may not be a clock or sync problem then. Have you tried different combinations of sample rate and buffer size? Try 48000 Hz.
Top

I've been able to solve the drifting problem with the Audiofire.

Things worked out once I set up my udev rules to allow access to the firewire device from the current user. This allowed Jack to properly start the firewire (ffado) driver, which brought up the "1394" clock light, and solved the drift problems.

Whereas I had previously been able to get the 1394 light on when starting ffado-dbus-server using sudo, that light would remain on even after I had quit the ffado-dbus-server, which I believe to be false. When I would start Jack after that, the device would actually not be in sync.

The steps to solve the problem were:

# The devices below are by vendors who make other firewire devices in
# addition to their audio interfaces.  They need more specific rules to
# ensure only audio interfaces are covered here.

# The devices below abuse another Vendor's ID, and therefore we need more advanced rules for those.

I can now use Jack with FFado and get the device all the way down to 32 samples with no XRuns and complete stability. This is the best this interface has ever worked, even better than on the (2009) Mac I was using before. I'm happy that I persevered and I thank all the Linux community for their endless amounts of work that went into the projects that I'm using: ffado, jack, ardour, and all the other supporting bits. I'm grateful to be part of the community and I hope to be able to contribute someday.

Also thanks to merlyn for thinking along with me.
Top

finetuned wrote:I've been able to solve the drifting problem with the Audiofire.

finetuned wrote:I had previously been able to get the 1394 light on when starting ffado-dbus-server using sudo, that light would remain on even after I had quit the ffado-dbus-server, which I believe to be false.

finetuned wrote:I'm grateful to be part of the community and I hope to be able to contribute someday.

Also thanks to merlyn for thinking along with me.

@finetuned: I'm glad you got it working.

When it wasn't working you got this:

Users browsing this forum: No registered users and 2 guests